(A slight diversion, where I opine and rationalize regarding the state of climate science. Take this with a grain of salt.)

The political writer Thomas Frank has been hammering on the issue of needless complexity recently:

There’s another point that we aren’t getting to here, which is the love of complexity with these guys, which is a really striking thing.

When you look at Obama’s two big legislative achievements, Dodd/Frank and Obamacare, the thing that they have in common, that everybody will look back on and say, “these are artifacts of an era,” is the complexity of them. Nobody understands them. I don’t even think the people who wrote them really understand them.

and this is how his recent book is described

Listen, Liberal: Or, What Ever Happened to the Party of the People?
By Thomas Frank
Metropolitan Books, 2016

Listen, Liberal, by historian Thomas Frank, makes a major contribution by bringing into focus the base for the neoliberal turn of Bill Clinton and Obama, upper-middle-class professionals. The focus on this group is a far cry from Occupy’s denunciations of “the 1%” or Bernie Sanders’ rhetoric about the “millionaires and billionaires.” Frank’s sociology is richer than that, but the book has one serious weakness, which muddies its understanding of the future.

Frank describes the ideology of professionalism, the belief that credentials demonstrate worth. Liberal professionalism also involves a strong sense of trend-following and often celebrates needless complexity. It is an ideology of expertise over democracy. Frank considers professionals to be “the liberal class.”

This transformed ENSO time-series looks complex, but the constituent factors are not:

The training interval for ENSO is shown by the bar. The rest is extrapolated.

If the behavior of ENSO does arise largely from the known oscillating forcings of the Earth’s angular momentum changes and the lunar orbit, then the reliance of the professional climate science community on overly complex General Circulation Models (GCMs) will need to be reworked.

One of the likely advisors on Michael’s thesis committee, James O’Brien said this a few years ago: 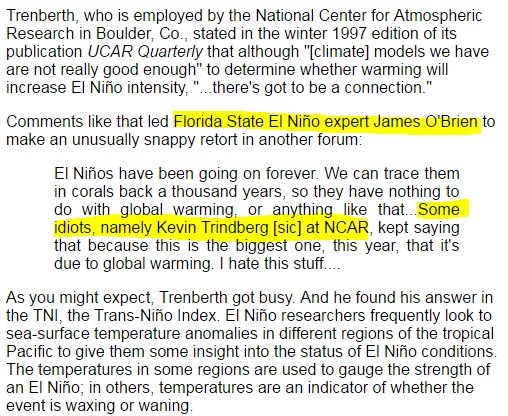 Is this an indication of what climate scientists think of each other’s work?

A retired climate scientist, Gerald Browning, with a long record of fundamental GCM work recently asserted at RealClimate that these models need to be reworked, since they according to him “use the wrong dynamics”.

Elsewhere I found this What I am using is essentially the same bare minimum shallow-water wave equation (originally known as Laplace’s tidal equations), with Coriolis forces canceling out, similar to the simple formulation of Clarke at FSU. Posted the following at Real Climate. 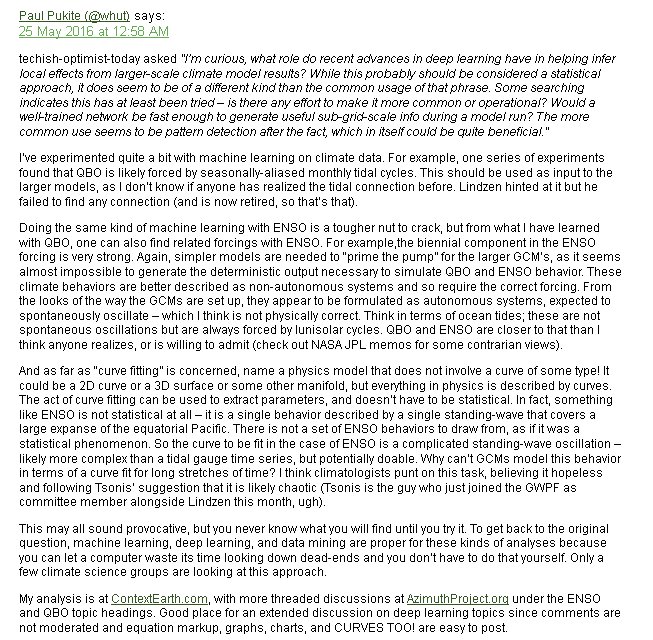 One startling fact that you will run across if you study the wave equation theory that underlies GCMs and behaviors for ENSO and QBO is how involved Richard Lindzen and Murry Salby in the original formulation. For example:

Recall that Lindzen and Salby are the most credentialed AGW deniers known to the public and upheld as paragons of excellence at skeptic sites. My suspicion is that these two (and others such as Tsonis) lack a real understanding in how the climate behaves and so got everyone on the wrong track with their early models. The likely reason that all these scientists are also wrong-headed skeptics is that they may lack an understanding of some key aspect in climate science. In Lindzen’s case, if you follow his papers they tend to get overwhelmed in the mathematics, which often is used as cover to actually figuring out the physics. IMO, Lindzen is the one scientist most responsible for all this needless complexity; it’s confounding how he never discovered the simplicity of the lunisolar-forced QBO model. However, needless complexity certainly supports his anti-AGW philosophy, as complexity in the modeling feeds the flames of uncertainty in the correctness of scientific models and therefore spreads doubt over the reality of AGW.

I really think it may be time to clean house and reappraise everything that Lindzen, et al had worked on. If there were a different cast of characters working on these critical areas of study, we may have advanced much further than we have in long-term climate prediction! I have a feeling they got where they are largely due to their ability to bully and intimidate their scientific adversaries. If you ever watch Lindzen or Salby in action on video, you can understand how through the force of their pretentious and sneering personalities, they could easily intimidate heads of funding agencies, colleagues, students, and now legions of skeptical followers. I bring this all up because it’s the only way I can rationalize the direction I am heading, which is simplifying all the complexity that Lindzen foisted on the conventional wisdom. If it was anybody else, I would think twice about bucking convention but we are talking about an evil character(**) in Lindzen here, who apparently thrives on being a contrarian. But in science, if you are a contrarian and wrong, that just makes you wrong. It may be time to debunk Lindzen, Salby, Tsonis completely and start with a clean slate.

** Like the Chief Inspector Dreyfus character in the Pink Panther movies, Lindzen can’t figure out why his nemesis is so much dumber than he is, yet has so much success. By the end of the arc, Dreyfus (Lindzen) has gone insane in trying to subvert any success that Clouseau (Climate Sciences) has attained. All that was left of Dreyfus was a nervously twitchy eye.